Maybe you've heard the saying that corn should be knee-high by the fourth of July. I'm not certain that it worked out that way this year -- at least in the fields of corn I noticed today. Harvest time may be a long way off, but there is a great deal to be anticipated as we live into the rest of these growing weeks and months in the meantime.

The same can be said of our own spiritual vitality and the ways in which the seed of God's Word grows and develops in our lives and in the lives of others. As you know, it takes time. And time takes time.

In anticipation of a harvest when the time is right, Jesus sends out seventy disciples to spread the word of salvation. Take a few minutes to review the gospel reading for this coming Sunday (Luke 10:1-11, 16-20). Come to worship to hear the story; gather at the feet of Jesus; and then be sent out as an emissary for Christ in your daily life. What may be the obstacles or excuses we use to delay our task of working for the harvest?


Prayer of the Day
O God, the Father of our Lord Jesus,
you are the city that shelters us, the mother who comforts us.
With your Spirit accompany us on our life’s journey,
that we may spread your peace in all the world,
through your Son, Jesus Christ, our Savior and Lord.
Amen

Hymn for the Day
Because singing a hymn that is unfamiliar can be unsettling, perhaps a bit of introduction is helpful. The hymn “Lord Jesus, you shall be my song” (ELW 808), composed in 1961 and available in both the original French and an English translation, is identified with the international L’Arche communities which provide family-like homes for adults with disabilities. Appropriate for this Sunday, the hymn announces that throughout our life journey, we will sing to everyone about our Lord Jesus. Stanza 4 acknowledges that our journey may be difficult, but that at its end is God.

Listen to this version of the hymn a few times to become familiar with it.  We'll sing it a bit faster than this recording.

Here are the words of Stanza 4:

I fear in the dark and the doubt of my journey;
but courage will come with the sound of your steps by my side.
And with all of the family you saved by your love,
we'll sing to your dawn at the end of our journey.

Posted by Christopher Frye at 7:15 PM No comments: 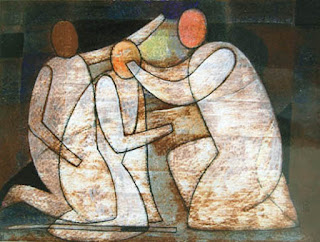 I find myself feeling disgusted, angry, frustrated, and numb in response to the news of the slaughter in Orlando. I wish I had words that could make sense of this tragedy.

In my view it is not as simplistic as jumping to conclusions about motive and affiliation in regard to the gunner. Yes, he squeezed the trigger again and again. Had he lived, he would have been held accountable for his actions. What we need to be held accountable for are the policies and systems that served to set this stage. When he squeezed his finger on the trigger, the trigger happened to belong to an assault rifle. As it turns out, he was perfectly free to purchase this gun in recent weeks, along with multiple rounds of ammunition that are specifically designed to kill people.

It disgusts me that such weapons are held in such high regard by so many. But what really is disappointing is how quickly the debate has become politicized thereby absolving many from self-examination and moral accountability.

I reluctantly share these reflections, knowing full well that some may parse them for offense. But let us all, no matter our stance and posture, see in this event in Orlando a cry for mercy. Lament the deaths of brothers and sisters. Lament along with those who have lost loved ones. Pray for the peace of God that surpasses all understanding to keep our hearts and minds in Christ Jesus our Lord.  O Lord, have mercy!