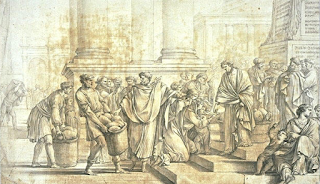 Last Monday evening with a group of engaged brothers and sisters who had gathered for a collaborative committee meeting, I shared a time of reflection on a passage from Acts of the Apostles. We listened together to Acts 2:42-47.  It recounts activity of the early church just as it was beginning to come into being following the resurrection of Jesus the Christ. From the sound of it, the church was off to a great start. Focusing on first things first, it faithfully gathered and was attentive to four core things: the Word, the Meal, fellowship, and prayer.

After reading this passage together twice, once from the New Revised Standard Version (NRSV) and the other from The Message, we reflected aloud on what, in our hearing, had struck us as significant or meaningful. Here are some of the responses:

The unity and intimacy of the early church as depicted here seems almost too good to be true. Indeed, as one of the respondents noted, it appears utopian (an interesting word). Properly defined, Utopia refers to an imagined place or state of things in which everything is perfect. (The word was first used in the book Utopia [1516] by Sir Thomas More.) Synonyms include: paradise, heaven (on earth), Garden of Eden, nirvana, etc.

Perhaps few would use the word utopia to describe the current state of affairs which characterizes the church of the 21st century - rife as it is with scandal, misplaced priorities and the confusion of success with faithfulness. As we have lost sight of our original state of blessing in the garden that was Eden, so too have we "progressed" beyond the original blessing of the church as it came into being in its early years. If Christ is the new Adam, then when was the moment in the church that we thought we should be like God, knowing good from evil? When were our eyes opened to discover our own nakedness? 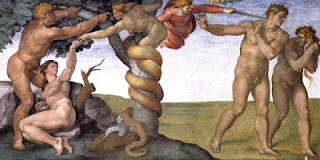 Michelangelo
The Fall and Expulsion from Garden of Eden, 1509-10

Is there any hope of recovery? Can we return to the clarity of purpose and mission that propelled the churches at the beginning to be about the task of making Christ known?

Toward the end of this passage from Acts, we read:


They followed a daily discipline of worship in the Temple followed by meals at home, every meal a celebration, exuberant and joyful, as they praised God. People in general liked what they saw. Every day their number grew as God added those who were saved.  (Acts 2:46-47 The Message)

If indeed we seek to recover such exuberance and joy, we need to seek first the kingdom by doing those things which are core and basic to our identity as children of God. Entitlement won't work here where faithfulness is both prologue and postlude. God has a way of not discriminating. We were created in original blessing and we have been called to be a new creation in Christ as his body the church. 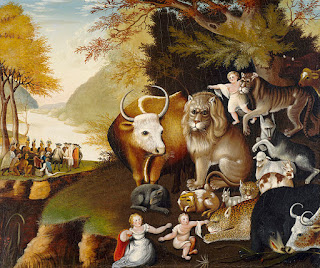 
The wolf shall dwell with the lamb, and the leopard shall lie down with the kid, and the calf and the lion and the fatling together, and a little child shall lead them. 7 The cow and the bear shall feed; their young shall lie down together; and the lion shall eat straw like the ox. 8 The sucking child shall play over the hole of the asp, and the weaned child shall put his hand on the adder’s den. 9 They shall not hurt or destroy in all my holy mountain; for the earth shall be full of the knowledge of the Lord as the waters cover the sea.

Posted by Christopher Frye at 10:51 AM No comments: