Stick-to-itiveness is one of the more inelegant words in the English language, but I have a special fondness for it. I heard the word a great deal when I was young, mostly, as I recall, from my mother. . .

. . . Years later I learned that the church has a fancier word for the same thing: perseverance.        - Eugene H. Peterson*

On a recent Saturday morning I drove to the church to gather some things that I needed later that morning for a graveside service. When I arrived at the church parking lot, I encountered a group of familiar faces who were preparing to begin work on picking up trash along route 997. (It wasn't on my radar and I initially thought that I had forgotten some meeting or church event.)

These folks had gathered for a regularly scheduled service work event. I learned that this mission to clean up along route 997 has been going on for approximately 25 years. Four times a year a group assembles and sets out to do the thankless job of picking up the discarded "souvenirs" of thoughtless travelers. You might be amazed at the quantity of debris that is collected in short order. When the bags of trash are gathered together, there is ample evidence of our society's careless approach to its habitat. The big catch is always the one in early Spring once the thaw of snow and ice reveals the months of wintry refuse and detritus.

As I arrived that morning, the group was preparing to take a photo by the church sign at the entrance to the parking lot. I offered to serve as the photographer so that everyone could be included in the picture. Either before or after the photo was taken (I can't remember which) we gathered together in a circle for prayer. We gave thanks to God for the new day and the opportunity to be of service. We asked for God's protection and strength for those who were serving and were reminded that it is God who sends us out to care for the earth that has been entrusted to our stewardship.

I can think of no better example of faithfulness than the band of brothers and sisters who have assembled four times a year for the last 25 to tend to this task of picking up trash.

In 1980 Eugene Peterson published a book entitled A Long Obedience in the Same Direction: Discipleship in an Instant Society. In this book, Peterson explores the Songs of Ascent (Psalms 120-134) and  teaches lessons on discipleship and encourages us to grow in joy, service, humility, and community. The work of the St. Luke Road Crew over the years reminds me of this book's title. And it offers us all a wonderful witness of what faithfulness in discipleship looks like. Being gathered together, equipped, and then sent out in service, is what it's all about. Our call to embrace Christian discipleship may take many forms and expressions. How might we find encouragement for our mission in the example of the St. Luke Road Crew?

Over the years, I bet the turnout from time to time has not been a robust as these pictures document. Nevertheless, they persisted to gather and be sent out. We, too, as a congregation, as the body of Christ, are called to persevere: to gather together, be equipped, and then sent out to serve in the many and various ways we can in the midst of an often careless and thoughtless society ever in need, not of our judgement, but of our care, compassion, and love. 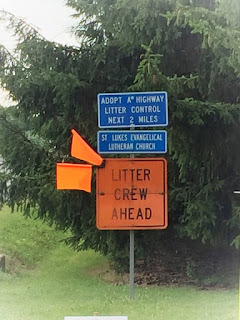 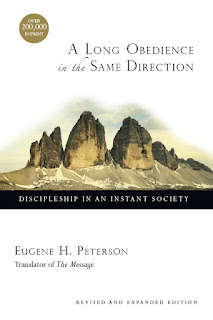 Posted by Christopher Frye at 6:54 AM