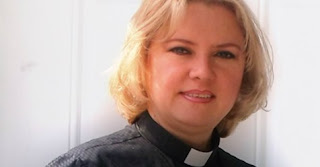 The following is a message from a sister congregation in Racine, Wisconsin:

Betty Rendón is a part-time student pastor at Emaus Lutheran Church in Racine, Wisconsin. Last Wednesday morning, Pastor Rendón’s daughter was driving her five-year-old to school from their home in Chicago. She was not two minutes from the house when she was stopped by ICE officers who admitted they were looking specifically for her. The officers arrested and handcuffed her, despite her protests that she is legally protected by DACA and should not be a target for ICE.

The agents took the wheel of the car and drove them back to the house, where Pastor Rendón’s husband, Carlos, was leaving home for work. The agents shouted at him in English, which he does not speak well, shook him violently, and shoved him towards the car. They ordered him to open the door of the house. Once the door was open, they forced their way in. A group of ICE vehicles with numerous officers then converged on the house and poured inside, brandishing their weapons and pointing them at the family. Pastor Rendón was still in her pajamas. They did not allow her to get dressed, but handcuffed her as she was. Her granddaughter screamed and cried while the officers searched until they found their houseguest, a cousin, who had fled into the basement to hide. They handcuffed him as well.

Having arrested all of the adults in the home, the officers allowed Pastor Rendón to phone the child’s other grandparents so that they could come collect her. While doing that, she managed to send a short text to the church to inform us that she would likely not be able to preach on Sunday. Pastor Rendón was particularly struck by the celebratory tone of the officers. They were jubilant because they had managed to arrest so many people in a single raid.

Pastor Rendón’s daughter was eventually released from custody and allowed to reunite with her daughter because, in fact, there was no legitimate reason to have arrested her in the first place. The other three family members were taken to the downtown facility in Kenosha, where they were strip-searched and processed. When they left, the ICE officers failed to secure the door, which allowed robbers subsequently to enter the home, ransack it, and steal all items of any value. A neighbor called the police, and there is a police report documenting the robbery.

The family came to the United States originally because Pastor Rendón was once the director of a school in Colombia during the war. The guerrillas attacked her school, assaulting several of her teachers. She applied for asylum in the US, but was eventually denied due to the lack of a police report, although she says everyone in the area knew of the attack. Once her appeals were exhausted, she was issued an order of deportation, but it was never executed. We are at a loss to explain why ICE should have decided to execute it now, just as Pastor Rendón is beginning her doctoral studies in preaching at the Lutheran School of Theology at Chicago.

Posted by Christopher Frye at 10:44 AM